Well then there was JustinBlacks.

Yes, JustinBlacks. Ok, this time it was an online connection on one of the more respectable dating websites, where they take your money and match you with people whom you have nothing in common with. It was like at first sight. A giant smile adorned his model like face, dark skin glowing, and after an instant chemistry we chatted at length. A couple of phone conversations and texts back and forth later the first date of many was arranged. He was debonaire, well spoken, owned an adorable dribbling Beagle, was of Punjabi background and looked a little like an exotic prince, loved good food and wine, owned a very chic city apartment, cooked a mean curry, kissed like a god, and smelt of comfort. Note: he also laughed like a hyena, said ‘ok’ at the end of practically every sentence, only wore black clothing, still spoke to his ex most days, wore his collars up, had a habit of shooshing me during conversation, and drove a BMW with a sports exhaust.

And so, it was a slow burn. Rather formal dinner dates where we would critique the food in a slightly pretentious bordering-on-wanker way, drink plenty of wine to feel less like pretentious bordering-on-wankers, and encouraged by the wine I would attempt to provide the entertainment while he laughed hyenically. It was three weeks of structured, formal, and rather awkward exchanges with a little light-hearted banter in between. It was ok.  Somehow two people who clicked so well initially were unable to relax and just be. But in the third week of our fire stoking we had an intimacy breakthrough. A night of dinner cooked in, deep conversation, much laughter and sustained gazes of passion…it was mutual adoration that felt like the beginning of our very own love story. It was better than ok.  And he felt it too, expressing his amazement at the “mind-blowing” connection that we shared that hadn’t been compromised by rushing things….in fact we hadn’t even moved past first base, not one article of black (or otherwise in my case) clothing had been removed. It was great. It felt like that rush of acceleration before takeoff. But then the rocket never quite launched. In fact things came to a grinding halt when he called a couple of days later and said “”I’m just not feeling it”. Imagine my surprise after his protestations of excitement only days before. I had the feeling that perhaps another in the running girlfriend potential had beaten me to the punch. But there it was. Rejection. Mind-blowing indeed. Only he was messaging me days later begging for an opportunity to explain. Did I dare take the time to listen? I dared. Stupidly. But there was no explanation. Instead I was greeted with a giant smile, a bottle of wine, a drooling Beagle that missed me, and a bowl of just cooked curry. Not entirely undesirable. Yet when I mentioned that I was feeling vulnerable about the situation and it would take some time to relax he responded with “Shhhhhhhh, I dumped you, get over it…ok?”

And as I reeled in my temper and politely left JustinBlacks to shoosh his Beagle and ponder on which combination of blacks to wear the next day, I became acutely aware of a very bad taste in my mouth. There was one way to put the behaviour of such an insensitive, self serving, colour discriminating, ‘ok’ abusing dumper to rest. Create. Cleanse. And so I’m turning up the music, sorting through my collection of spice, and singing along at full voice, no shooshing allowed…ok?

A taste of Pakistan 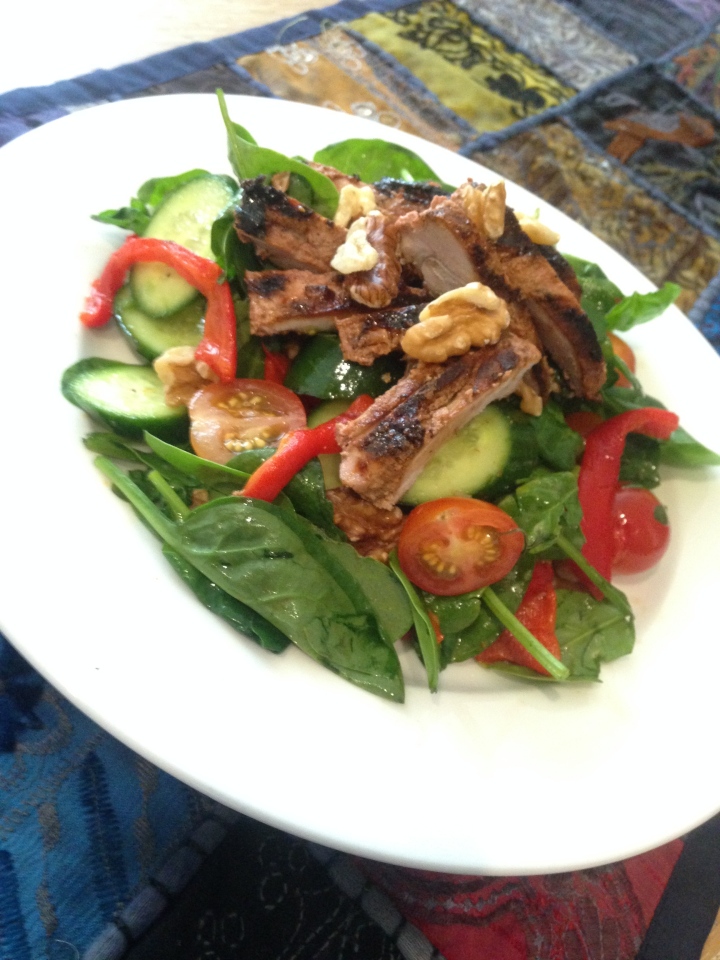 Score the chicken thigh fillets with a sharp knife. Mix all the ingredients of the marinade together and add the chicken pieces, coating well. Leave to marinate for as long as possible, overnight if you can. Tandoori chicken is traditionally cooked in a high heat wood oven which cooks the chicken crispy on the outside and juicy on the inside. I chose to grill the fillets which worked well too, resulting in crispy flavoursome grill marks and soft, succulent meat.

For the salad, roast the capsicum under a hot grill until the skin starts to blacken. Remove, cool slightly, cover with cling wrap, and place in the refrigerator. Once cooled, remove the cling wrap and peel the skin off the capsicum, remove seeds and cut into thin strips. Toss all the ingredients of the salad and a large spoon of mango chutney together well. If mangoes are going cheap I suggest making your own chutney. As mangoes are well pricey at the moment I opted for a supermarket bought chutney. You can also add fresh mango for some extra colour. Cut up your chicken fillets into edible pieces and serve over the salad. Add a squeeze of fresh lemon juice and salt to taste.

Mix all ingredients in a blender. Serve chilled and dust with a little ground cardamom. Add a little ice to the blend if you want it super chilly. Flavour bomb!

Sufficiently satiated. So much flavour in my mouth. Bad taste gone.