Preach not to me

Well then there was LookingforRecruits.

Yes, LookingforRecruits.  We met online.  A tranquil Sunday afternoon with nothing better to do than shop for a boyfriend.  His picture caught my eye first.  Cheeky smile, three day growth, dimpled, playful dark eyes.  And the conversation flowed like cheap easily drinkable champagne.  Within an hour a first date of pub beers and live metal was arranged, with the odd request that I wear flat shoes.  Height envy alert.  But the date was locked in and I arrived comfortably wearing a vintage sequinned mini and tee with my newly acquired pair of Mexican flat-heeled ankle boots.  He was funny, sweet, a little wicked, Colombian in background with a fierce determination to teach the greater community to spell Columbia (ie Colombia) correctly.  A tanned and dishy Latino with a ridiculously sexy accent, he was a musician who had traveled through Melbourne and couldn’t bring himself to leave, and now worked in construction fitting music in around the edges, and his slightly shorter stature was negligible considering the electric energy he exuded and the buzz that vibrated between us.   Two or three jugs of beer, many hysterical laughs and increasing flirtatious banter later we moved on to the next pub for a two person thrash band and a couple more cold ones.  Ecstatic, full of yeast, slightly deaf, and lustfully clinging to each other we finished the night in my bed making thrash music of our own.

And so, it was beer and music fuelled infatuation.  The following morning, groggy and dry-eyed, we recovered with a fatty breakfast and strong coffee.  Good conversation, affectionate touch, and sugar replacement.  Bliss.  Within a couple of days he was again at my abode and this time for dinner.  We listened to music for hours while he strummed his guitar, we danced to bachata, and fell asleep entwined in the summer heat.  Our third date was a lazy Saturday afternoon of couch lying, sorting through favourite musical tracks, and discussing all sorts.  During the afternoon LookingforRecruits broached the topic of conspiracy theory and it soon became clear that it was more than a casual interest to him.  In his world such phenomena as the Illuminati, fluoride mind control, chemtrails, and the possibility of hanging with Elvis and Princess Di were more real than reality itself.  Being a little naive on the subject I agreed to watch a documentary recommended by LookingforRecruits.  It was fascinating if not a little far-fetched and led to many more discussions on a number of occasions, interspersed with copious amount of music, food, laughter and mutual like.  But as the weeks passed by there seemed to be less flirtation, less affection, and nearly zero mattress dancing.  A little confounded I decided to bring up the ‘what is this?’ subject the next time we met.  And when I did I became even more confused.  LookingforRecruits suggested that we move in together.  And when I asked under what circumstances we would co-exist he replied “good friends that have fun”, expressing a really vague position on commitment.  Even though it was foolish, part of me entertained the idea.  Clearly I was crazy about this guy as my brain had ceased to function.

A little perplexed on what to do next I accepted an invite to join LookingforRecruits and his friends on a Saturday night out.  It was a blast.  And I felt like his girlfriend.  He held my hand, we danced together, he stroked my leg as I sat beside him, regularly checked in to see that I was ok and happy to stay, and ended the night entangled once again.  But then on the next few occasions there were again mixed messages.  A cuddle here, a handhold there, but no more kissing or clotheless sleepovers.  A consistent theme did remain however.  Conspiracy theorising in conversation abounded, and LookingforRecruits seemed on a mission for me to become more of a believer.  I knew the time was approaching to put an need to this non-relationship as it was ripping my heart out and Romeo was leaving me so unsatisfied.

On our final meeting we met at the beach together with a couple friends of his.  It was unbearable.  His friends were all over each other in love and there we were with a proverbial pillow wedged between our half naked bodies.  I felt ridiculous.  Time. to. quit.  But when I poured out my heart to him, revealing my inability to friend zone him he didn’t seem upset.  Just disappointed.  And not a ‘disappointed to see you go’ kind of disappointed.  It was more of a ‘I’m disappointed in you’ kind of disappointed.  And then it dawned on me through my infatuation drugged haze.   I had failed him as a student.  He believed himself the messiah and he had lost his disciple.

But enough of this conspiracy preaching, intimacy abusing, accent flirting shortass. Time for a real Columbian, I mean Colombian treat.  I’m going to whip and beat and smear and bake and create.  Ah, the religion of food.  The divine.

A taste of Colombia 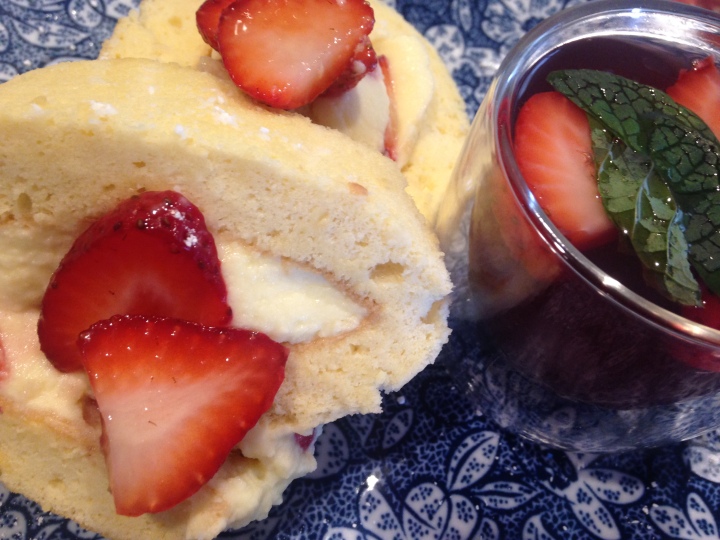 Preheat the oven to 180 degrees centigrade. Line a buttered lipped baking tray with baking paper and grease the paper.
Separate the eggs into two small bowls. Beat the yolks until pale and then slowly add the sugar whilst beating. Then beat the whites until stiff. Slowly add the flour to the yolk mixture and combine. Now fold through the whites. Spread evenly across the buttered pan. Place in the oven and bake for 10 to 12 minutes, until lightly golden on top. Leave to cool.
Whip up the cream and icing sugar until thick. Slice the strawberries into a bowl and drizzle the honey over the top of them.
Spread the cream over the top of the cooled sponge and scatter with the strawberries. Slowly roll the sponge from one end to the other. Sprinkle with icing sugar.

I served this cake with fresh fruit tea. To make the tea boil 3 cups of water in a saucepan and add a cup of fresh strawberries, half a cup of blackberries and 15 fresh mint leaves. Let the concoction simmer for a few minutes and then take off the heat. Add honey to taste.

Deli!  I’d consider worshiping a strawberry if it preached to me.