Well then there was Badpickupline.

Yes, Badpickupline.  Now I’ve heard some pick up lines in my time but this one really takes the prize.  It was a regular kind of Friday night and a group of friends and I had ended up at our favourite local Italian eatery, ravenous post university.  Our boisterous, hungry behaviour seemed to catch the attention of one of the baristas.  A particularly cute barista.  And when I approached to order a second round of drinks he made sure he was there to take my order and flirt with an abundance of charm and sweetness.  He indicated that he had seen me many times previously and had hoped to get to know me better.  Dinner arrived but our eyes often met across the room whilst I was stuffing my face with pizza and laughing operatically over second glasses of wine, and by the time dessert arrived I had been invited on an after dinner digestiv.  Now while it was bordering on inappropriate first date conditions I decided that 9:30 pm was just acceptable and what harm could one more alcoholic beverage really do?

And so, it was a cosy glass of getting to know you wine.  He was of Italian background, born in Australia, came from a large family, loved his soccer and his mamma, worked as a tradesman when he wasn’t playing the charming barista, enjoyed festivals and any music that made him want to dance, and embraced any opportunity for travel and adventure.  Note: He also said ‘fully sick’ and ‘ohmagod’ at regular intervals.  We shared a particular love of Italy and spoke at length about our travels there.  Some of Badpickupline’s family still resided in Naples and he coyly hinted at taking me there for a holiday.  His eyes sparkled like the waters of Porto Vecchio as he talked of his nonna, endless days of sun and sea, giant plates of home cooked pasta, and family together under one happy roof.  The memories played out lovingly over his fine face and I was swept away to the Italian coast.  It was all very lovely, relaxing, and a little bit romantic.

So when it came to midnight and the clock struck twelve I regretfully murmured that it was probably my time to go.  Looking a little forlorn he offered to drive me home to save on the taxi fare but I declined, thanking him for the offer.  He then attempted to coerce me into another drink with all the charm and persuasive tone he could muster.  Even though I was wildly tempted, I resisted.  And as I reached forward to pick up my purse he took my face and kissed me, softly at first but then with such an intense passion it put my head into a disorienting whirl of joy.  I was still spinning when I realised he had spoken just after our kiss and I giddily asked him to repeat himself.  I noticed something new was lurking behind his eyes, as though he was an animal approaching it’s prey, and as he repeated himself it looked as though he was about to pounce.  “If you give me a head job, I could pleasure you” he said……..I beg your pardon??  I was speechless, mystified, clueless.  I silently wept as I saw the tide wash over the promise of my romantic Naples holiday.

I was confused.  In what world had that line ever worked for him?  And how could it immediately go from a passionate kiss to a sexual business proposal?  And why in that proposal was I having to do the job first?  Ladies pleasured first.  Please.  But I’m certainly not taking any favours from such a sweet-talking, prey hunting, slang dependent, romance dispelling mamma’s boy.  Time to pleasure myself…..in the kitchen…in a completely non-sexual way.

A taste of pizza 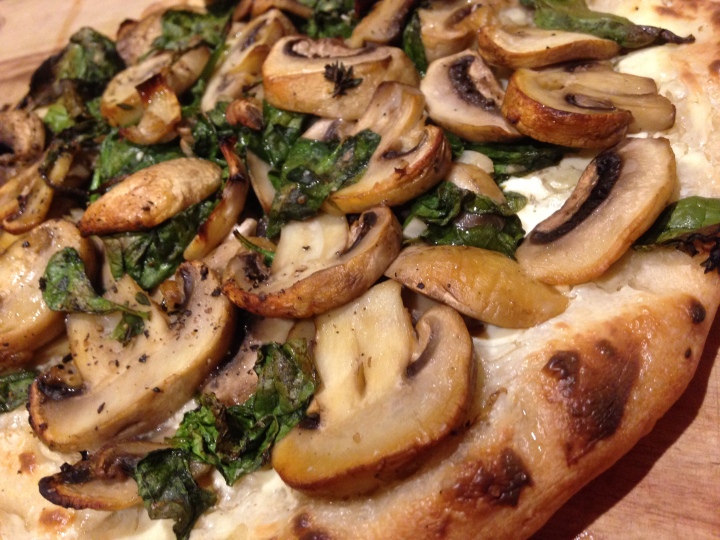 Napoletana dough with topping of choice

Add all the dry ingredients and mix to distribute, with a spoon or electric mixer with paddle attachment.  Add water and stir through until all the flour is absorbed, for 1 to 2 minutes.  Let it rest for about 5 minutes and then mix for another minute.  Add a little more water or flour as needed.  It should feel soft and tacky to the touch.

Rub your work surface with a little olive oil.  Scrape out the dough mix on to the surface.  Imagine the dough as a square shape.  Take one corner and stretch it out and away from the centre of the square and then fold it back into the centre.  Repeat with each corner, so it becomes a ball.  Take the bowl and place it upside down over the dough and leave it for 5 minutes.  Repeat this process of stretch and folding and resting three times.  Each time the dough should become firmer and less sticky.  After the fourth stretch and fold return the dough to a bowl and cover until it doubles in size, for approximately 2 to 3 hours.

Preheat your oven to 250 degrees centigrade.  Once ready take a third of the dough and turn out on to lightly floured surface.  Stretch the dough out carefully using the backs of your hands and turning in a circular motion, manipulating the edges of the dough outward with your thumbs.  Let it rest a minute or so once it starts to feel tough to stretch.  Continue until the dough is approximately 25 cm in diameter.

Take your pizza base and carefully lay it on a pizza stone or an overturned baking tray.  Cover it with the ingredients you so desire and place in the oven and cook until golden brown at the edges, for approximately 15 minutes.  Delizioso!

Topping suggestions: As a base for my first pizza I used a tomato sauce.  I whipped it up in a saucepan using a little olive oil, half a clove of garlic, a tin of tomatoes, 1/2 tbsp red wine vinegar, a sprinkle of dried oregano and basil, and salt and pepper.  I smeared the sauce (not too generously) across the pizza base.  For the topping I used a combination of bacon, tomato, mozzarella, kalamata olives, onion, and roast capsicum.

For the second pizza I smeared cream cheese across the base (goats cheese would be yum too).  For the topping I mixed a little olive oil, a crushed garlic clove, and chopped mushrooms in a hot pan.  I then added some spinach until it wilted and seasoned to taste. 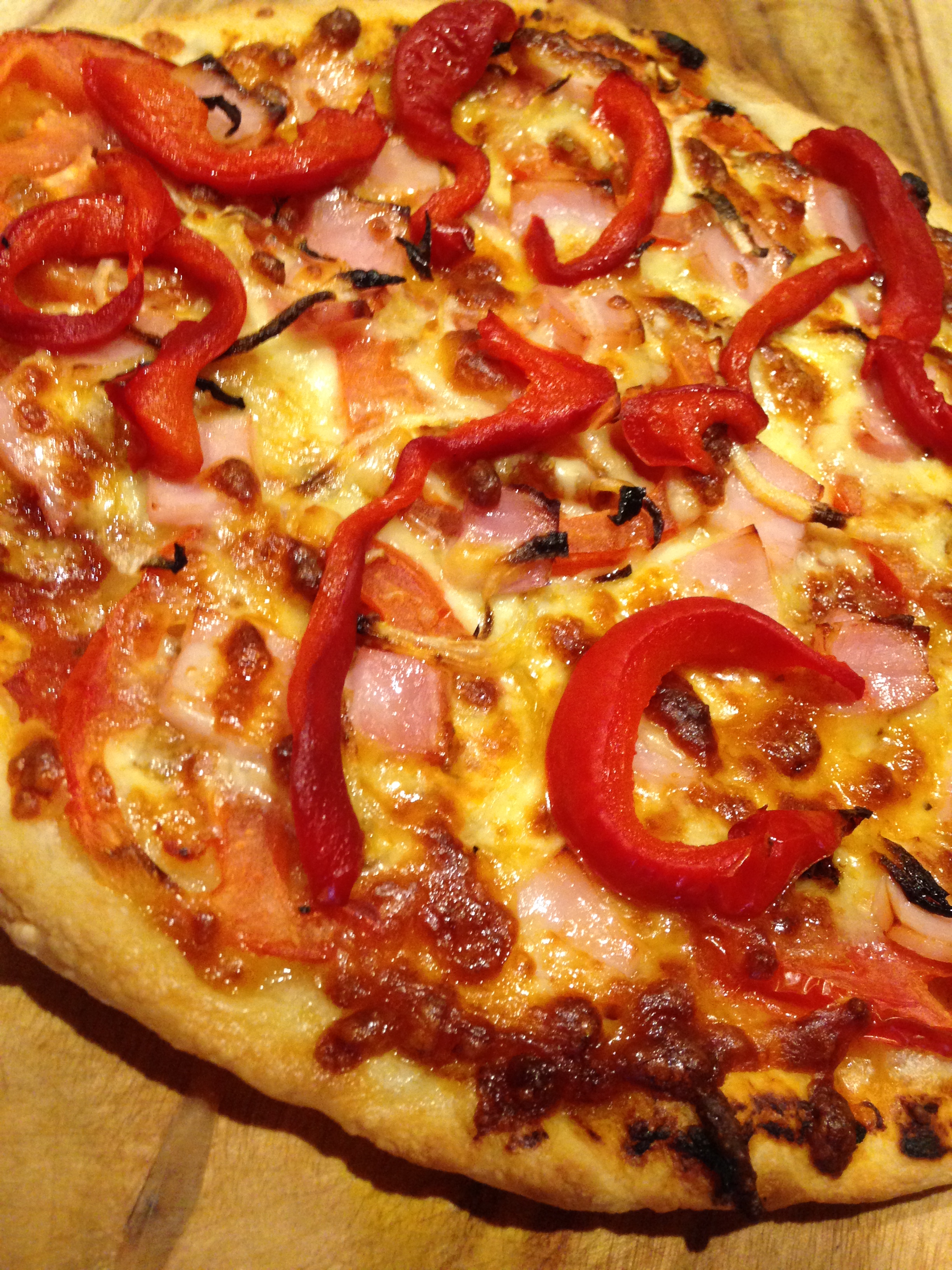 Um, this is the kind of flavourful favour I enjoy!