Well then there was SelfieJunkie.

Yes, SelfieJunkie.  There he was.  Online and looking fine.  Swipe right.  Match.  His photos showed him living life large in various states of larrikin action with friends.  He was tall, as statuesque as the David, with lucent skin, looking as though he had just stepped out of a male magazine shoot, and in his bathers he looked as though he had been chiseled for a Nike advertisement.  My breath was taken.  And so the conversation began.  It was nice.  A what-do-you-do?, what’s your favourite movie/food/music/colour kind of getting to know each other, with a little mild flirtation.  It was safe.  Respectful.  Not too naughty or suggestive.  Not ringing of ‘guy seeking one night stand’ or ‘one hour stand’ as seems to be more on offer these internet dating days.  He was an engineer from America working in Australia on contract, loved cheesecake and staying in for movie nights, was funny and intelligent without being too cocky or self-important, seemed quite humble about his achievements, seemed expressive without being too poetic, manly without being overly macho, and very interested in planning our first let’s-get-together-and-eat-cheesecake date.  Note: He was also gym mad, spent 10 hours a week working out, and sent 8 selfies during our first conversation.  But it felt like he had most of the material to make a great fitting first date, at least.

And so, it was anticipation.  Hours passed.  Days passed.  A week passed.  Two weeks.  Deciding to take this bull by the horns I messaged SelfieJunkie to see if he still existed or if he lay trapped beneath a bar weight after eating too much cheesecake.  His response was immediate.  It started with a simple message “I’ve been thinking about you”.  But what followed was altogether unexpected.  SelfieJunkie was rather forward.  SelfieJunkie was standing to attention.  SelfieJunkie was missing his underwear.  I wanted to scream “Put it away!”  But it didn’t stop at just one blatant sexual image.  Unfortunately they kept on arriving, culminating in a photo of SelfieJunkie in the shower, hand on joystick in the middle of his own lonely climax. Human intimacy had reached a new low.  I had been visually violated.  Was this a mistake?  It certainly wasn’t a conversation, at least not one I started.  I felt like SelfieJunkie had taken his hotdog and slapped me into a state of nauseous disbelief.  Clearly the lets-get-together-and-eat-cheesecake was no longer an option.  But I didn’t know how or if to respond.  Would a middle finger salute suffice?  Maybe I could make a set of coasters out of the photos and sell them online, or make a missing person’s poster with the headline “Have you seen this penis?”  Instead I sent a reply message “Well that’s a shame” and left him to ponder my meaning.

In what world was this ok?  As beautiful as he was I didn’t ask for a naked viewing and I most certainly didn’t ask to accompany him for shower handies.  Where is the respect or human dignity in plying someone with sexual images without their consent?  It’s not ok. It’s.really.not.ok.  Seeing him so aggressively stripped bare had left a very bad taste in my mouth.  This was going to require time, flavour, and beauty through creation. And these words, my own personal protest against selfie sexual harassment.

A taste of America 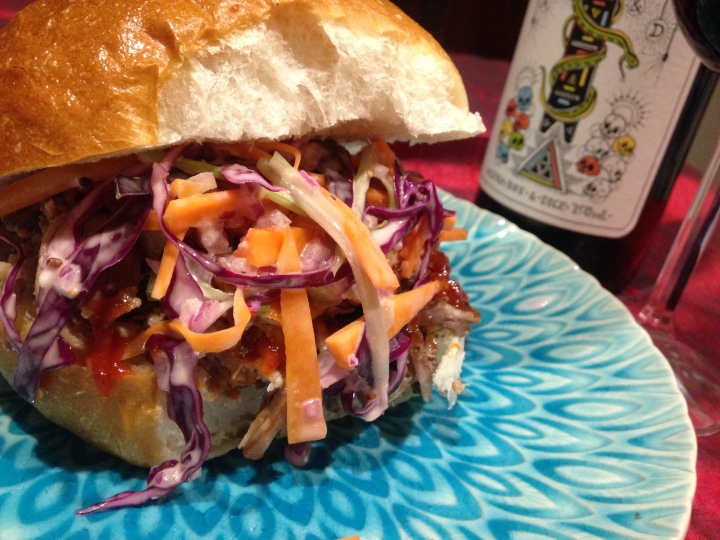 Remove excess fat from the pork.  Pat dry with a paper towel.  Combine the cumin, mustard powder, coriander powder, brown sugar, and a good amount of salt and pepper to taste.  Rub over the pork, cover, refrigerate, and leave for a couple of hours.
Preheat oven to 150 degrees Celsius.  Heat vegetable oil in a roasting pan.  Seal and brown pork on all sides.  Remove and add onions and garlic.  Once onions are cooked add lager to the pan.  Reduce a little and then add chicken stock.  Return the pork to the pan over and cover with a good amount of aluminium foil.  Place in oven and cook for at least 4 hours and turn every hour.  When cooked the pork will pull apart easily with two forks.  The pan drippings can be used to moisten and flavour the pork further if you prefer.
For the sauce, combine all the ingredients in a saucepan and bring to the boil.  Leave to simmer and thicken for an hour, stirring occasionally so the base doesn’t burn.
To make the coleslaw combine the mayonnaise, vinegar, mustard, lemon juice, zest, celery salt and salt to taste.  Mix through vegetable ingredients.
Grab some fresh burger buns or cook your own.  Layer the pork mixture, sauce and coleslaw on your bun and you have created a little bit of heaven for your tastebuds.

One extra large serve coming up.

Loving my selfie with this one.